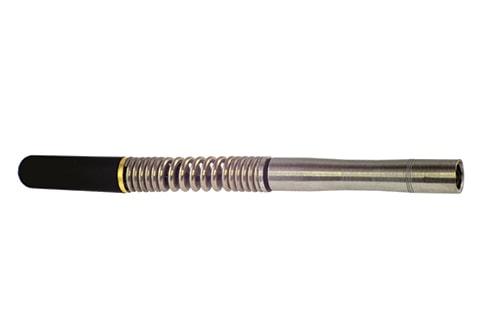 The S6 MicroSonde is a very small transmitter designed to allow operators to trace and detect blockages in even very small buried pipes and ducting.

With a diameter of only 6.4mm / ¼”, it is particularly suitable for tracing blockages in fiber-optic microducting or for tracing other small non-conductive pipes.

The S6 MicroSonde is available as a kit, containing:

A pack of 10 replacement lithium batteries is also available.

Application example – microducting
More and more cables and pipes are being laid in the underground network, making buried utility ducts increasingly congested. One way to overcome this issue is to install smaller, dedicated utility ducts within the main duct for use by the relevant utility companies.

The telecoms industry in particular needs to be able to install delicate fiber-optic cable into congested ducts. One solution is bundled microducts, small (commonly 8mm & 12mm diameter) ‘ducts within a duct’ which each carry and protect a bundle of fibre-optic cables – this arrangement also allows utilities to install spare duct capacity, with the fiber being added at a later time.

Fiber Blowing
In order to install fiber at a later date it is increasingly common to use compressed air to ‘blow’ the fiber in, reducing costs of manual labor and enabling distances of some 3.5km to be covered in a single operation.

Blocked / damaged ducts
Utility ducts and microducts may become blocked or deformed, both before and during use. These blockages cause delays due to failed cable insertions, and can even require excavation to clear them - an expensive and time consuming task.

The S6 MicroSonde is designed to be blown or pushed into a small buried duct using the installer’s standard installation kit. By following the path of the sonde as it travels, operators can trace the buried master/micro duct, reducing the risk of damage from local excavations, or simply to confirm its route.

If a blockage is found, an operator can locate the position where the sonde stops from above ground, and evaluate how to bypass or repair the issue.

Application example – electrical wiring
Commercial, and modern homebuilding frequently use plastic ducting to lay cables below floors and inside plasterboard construction. The S6 MicroSonde, used with a suitable flexible rod, permits tracing of blockages and junctions inside buildings, obviating the need to expose the entire duct to repair or unblock any problem areas.

Find out more about the S9 MiniSonde.