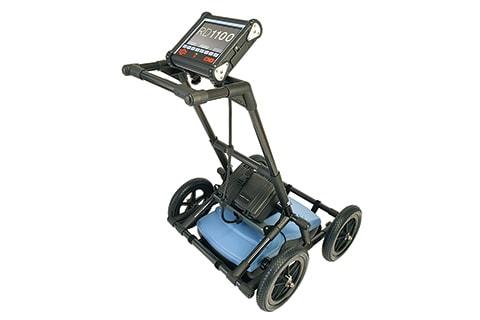 Radiodetection’s RD1100 provides high-performance subsurface imaging for buried utilities in a rugged and competitively priced GPR system.  Designed for the utility industry, the RD1100 features a wide-band sensor capable of detecting plastic and ceramic utilities at depths of up to 8m / 27’ deep.

Its high resolution touch screen display adds to its ease of use, including the ability to draw arrows directly on the screen to highlight subsurface features of interest.

Screenshots are taken with a single button press and saved to internal memory as JPGs. These can be exported later to a USB memory stick or emailed by connecting to a Wi-Fi network or by using a cell phone as a hotspot. Instant information, higher productivity!

GPS positioning is captured alongside the Line View data for integrating into geo-referencing packages.

Ground Penetrating Radar (GPR) can detect ceramic and plastic pipes and ducts which would otherwise require tracer wire or sondes to detect using an electromagnetic locator. The RD1100’s ultra wide-band enables detection of a wide range of buried utilities without introducing the cost or complexity associated with multiple antenna GPRs.

Accurately locate and mark utilities in a single pass

To locate a feature, simply roll the system back along the same path until the red position indicator line is exactly over the response. Drag the depth indicator up or down to the desired location to display its depth value. To get the position and depth information about a different point on the screen, simply touch and hold that point for a second for a cross hair and location information to appear.

One simple button press captures the Line View on screen, including GPS data and any marker arrows and flags that the user has added.

Mini projects, containing screenshots and a table with information about the collected data, can be emailed immediately to clients or colleagues using the on-board Wi-Fi, either via a nearby wireless network or the user’s smart phone in hotspot mode. Screenshot images can also be exported to a USB drive for transfer to a computer or archive system.

The high resolution Display Unit features touch screen operation, providing the user with the ability to draw arrows on the screen to highlight features of interest. Soil calibrations are simply done by dragging a Soil Cal Hyperbola to lie over a real hyperbola from the ground and matching the shape.

The RD1100 includes GPS on board as standard, allowing screenshots to be geo-tagged and a .kmz file to be generated. This file can easily be opened in Google™ Earth, and shows you the geographic position of those screenshots.

Light-weight, rugged and weatherproof (IP65) system designed for use across challenging terrain. Optional larger wheels can be fitted to ease use across particularly soft or rough ground. The RD1100 can be assembled on-site in less than two minutes, and can be dismantled without requiring tools, allowing compact storage and safe transportation. Soft and hard cases are available for transportation of the display unit; alternatively an optional flight case can be used to protect the entire system.

EKKO_Project
Included within the RD1500 Enhancement option, EKKO_Project enables the user to:
organise data into projects for increased storage on the RD1500; slice through the exported depth data for increased clarity
generate PDF reports that include data images, screenshots and photos alongside the user’s text and company logo; and export data to other formats like CSV and SEG-Y

Utility Suite
For RD1500 Enhancement users, the Utility Suite software option offers an even more advanced analysis solution by providing three additional modules:
LineView module, which can modify the view settings to optimize the image and show data corrected for elevation; SliceView module for processing and displaying grid data as GPR lines and depth slices, and can output data into a 3D format for 3D visualization software such as Voxler® and; Interpretation module, which helps extract useful information from GPR data into other formats, such as CAD.